“I remember well, for instance, how here in Rockford, Ill., say twenty years ago, the indigenous plants of the prairie and oak-opening sprang up on every side in close proximity to the beaten paths of busy men. The industrious young botanist, collecting for exchange, found his only limitations in the quantity of driers he possessed, and the amount of time, energy, and discretion he could bring to the work of using them well. Now we must go miles out into the country for material and count ourselves fortunate, even then, if the little vestige of the native flora which last season afforded us a dozen desirable specimens has not since been swept away by the plow; while in the central portion of the city scarcely a single native species remains to dispute possession with street weeds, mostly of European descent and training.” –Michael Schuck Bebb, 1882

A friend had the idea to assemble links to the earliest descriptions of the Illinois and Chicagoland region flora. With great joy I have spent the past few weekends scouring botanical texts from the early 19th and 20th century, reading arguments regarding the nativity of Epipactis hellborine or the range of Quercus palustris, accounts of the vast prairie fires, and a description of Englewood (a now very-paved-over Chicago neighborhood) by E. J. Hill in 1883 as “houses scattered over the prairie, with interspersed patches of grass land as virgin as when the buffalo and Indian roamed over it.”

We have assembled a few dozen links to these texts on a  single webpage for the public’s perusal. Read more at the Forgotten Flora of Illinois and the Chicago Region page: 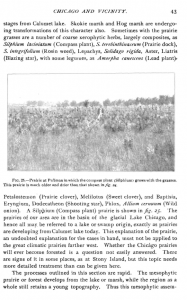 “The earliest botanists and explorers of the Chicagoland region beheld a landscape that was vastly different from today’s natural environment. Their early accounts of Illinois flora describe plant communities that defy contemporary understanding and offer surprising depictions of bygone ecologies that have since succumbed to pavement and the plow. By compiling a representative selection of botanical texts from the nineteenth and early twentieth centuries, our hope is to make these forgotten flora available to twenty-first century stewards and restoration enthusiasts in order to foster imaginative and historically faithful visions of the prairies, savannas, woods, and wetlands we seek to restore.” – http://habitat2030.org/forgottenflora/

The page is still a work in progress; I expect to add many more resources and short blurbs to each.

3 thoughts on “Finding the Forgotten Flora”